Hi Habby, Pleased to Meet You! 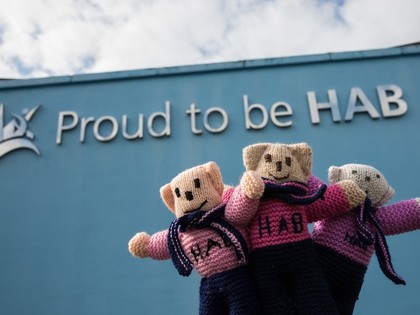 Meet our knitted mascot, Habby. Habby was designed by teacher Karen Harrild and is based on a pattern used to make bears for children in trauma situations, for example in A&E, where cuddling a bear helps them cope with frightening situations.

“My mum makes them for this reason and also sends them to Africa through a charity who make up children’s boxes of paper, books, pencils and other useful items, plus a bear of their own,” says Karen.

"Guess how many stitches"

“I started by making one for my daughter to take to Africa in Tanzania flag colours and that gave me the idea of making a HAB bear in the Academy colours, which we sold at the HAB Summer Fair last year.

“I emailed the pattern to all staff and several teachers made Habbies as did the grandmothers of two of our teachers. My mother also made us some bears.

“I then decided to make a big Habby bear which people could try and win. People paid 50p to guess how many stitches it took to make one. Sinem in Year 9 won with the closest guess. The total was 59,703 stitches!” 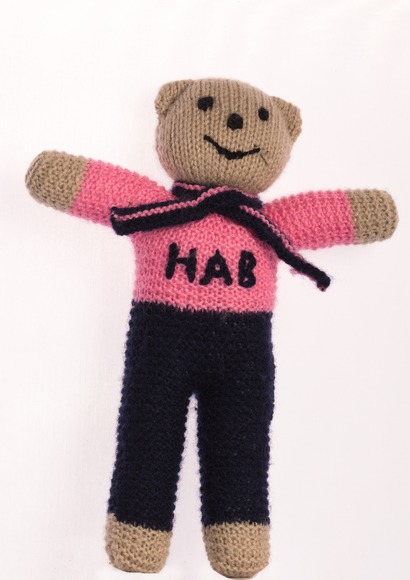 Habby has helped to get our girls get knitting too. “Amy Morris, our librarian, organised a knitting club in the library for Key Stage 3, on three nights a week,” says Karen. “Iman in Year 9 proved to be a very skilled knitter and completed a Habby bear for herself. Habby bears were sold at the Summerl Fair last year and many teachers bought them and have them in their classrooms.”

This year we have more Habby bears for sale and another large Habby bear to win. “We can’t do the number of stiches again so maybe we’ll ask people to guess his birthday,” she adds.

We are also making keyrings featuring Habby pictures which will be available at the Summer Fair.

The HAB Summer Fair is on Saturday 15 July.