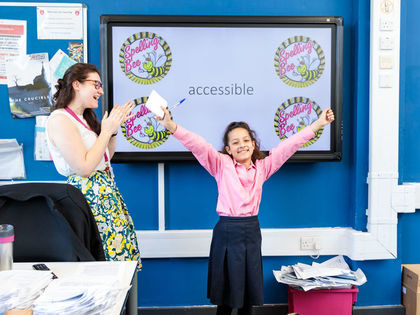 Four champion HAB spellers have been selected to compete in the Harris Federation Spelling Bee, which will be held at Harris Academy Peckham next month.

Xue-Jun (Year 8) and Angelic, Shelly and Maame (Year 9) won their places on the HAB team after competing in tough heats (see picture) where they had to correctly spell words such as miscellaneous, onomatopoeia and kaleidoscope.

In preparation for the big day, the four will attend after-school training sessions run by the English department. “We will guide them in specialised study techniques as well as confidence-building activities to ensure students remain poised under the bright lights and gaze of the audience,” said English teacher Jade Bailey.

Good luck to our HAB Spelling Bee team on the big day. You'll do us proud, we know.

Picture: "I can spell 'accessible'." Students compete in the Spelling Bee heats to see who will make the team.