HAB Donates to Crisis at Christmas 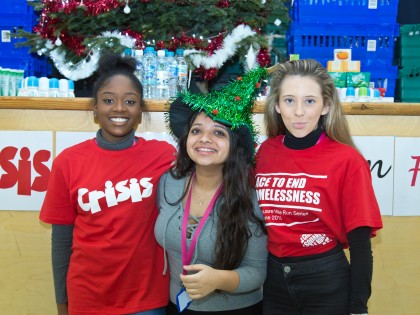 For the third year running, HAB has teamed up with Crisis to support guests and volunteers at Christmas time.

HAB girl Beatrice spoke to parents and carers about our work to support the homeless community at HAB’s recent Dance and Music Display, where attendees generously donated £150! Here's what she said...

‘Welcome ladies and gentlemen. My name is Beatrice and I am in year 8. I hope this evening has already brought you great pleasure and joy. I am going to talk to you about Crisis, a charity that we have been supporting for the last three years. The organisation’s aim is to stop homelessness, especially for the people that consider themselves an outcast in society.

Last year was particularly special year as everyone in the Academy embraced all of the things that we did to raise awareness and to provide help to the charity and in particular to the homeless people in Southwark in an energetic and positive spirit.

We were set the challenge of bringing in 5000 items that would be given to Crisis to distribute to people that needed them. We brought in toothbrushes, toothpaste, soap, roll on deodorant and water – items that are useful to the recipients. We more than met the challenge and on the last day of term were able to present Crisis with over 5000 items.

In addition, every HAB girl wrote a message on a paper Christmas bauble which we shared with Crisis.

When School reopened in January we learned that more than 200 guests had benefitted from our donations and had read our messages in just that short, two week period. We were really moved to read letters of thanks that had been sent to us and how much our messages of hope had made people feel good and noticed and not, as homeless people often say, ‘invisible’. We were really pleased to hear of two guests who had been able to get help from the Crisis team to apply for and secure jobs. We were especially pleased to hear of another guest who said that as a result of the help he received he had been able to secure a job and a home by the end of January for the first time since he was 16 years old.’

We’re thrilled that this year, HAB girls have beaten the success of last year’s donations with well in excess of 5000 items collected over the past two weeks, testament to the incredibly generous spirit of HAB girls. We look forward to sharing with you some more success stories in the New Year. In the meantime, we wish you a happy holiday.