Eid Mubarak to everyone celebrating today and tomorrow! https://t.co/eexOZEc30h

Banners created by Year 7 girls to show their support for Year 11 student Andrea Spendolini-Sirieix, who has been selected for the GB diving team at the Tokyo Olympics. They are so excited for Andrea and wanted to show how her ambition has inspired them.https://t.co/VkJFIXnvcP https://t.co/FPYSHB1U1Z

Sara, one of our #chemistry sixth formers has won a silver medal in the University of Cambridge’s chemistry competition for secondary students. Sara won a Ag Award (silver for those in the know) putting her in the top 4% of chemistry students in the UK. Well done, Sara! https://t.co/MdjaprwAfw

Year 8 girls represent the Marshall Islands at the @HarrisFed Climate Conference. The conference aimed to model the #COP26 conference that is taking place in November. Full story https://t.co/Y3scW9CaWR https://t.co/nRp47KruK7

We are hosting a Year 5 Open Event Webinar on Wed 23rd June, 5pm. It's a chance for our incoming Class of 2029 and their families to meet key HAB staff, and gain further information about making a successful transition. Register at https://t.co/hpe9emsNyj https://t.co/5e7OJbVQOt

The next Big Big session is this Thursday 10th June, 2pm – 6pm. Fancy joining us to build a shed or fill a raised bed, and create our new Wellbeing Garden? Click here to to sign up! Hope to see you there! https://t.co/U76z7GdBun https://t.co/9SW8zVQqAq

Year 10 students have successfully completed the International Model United Nations conference in the Netherlands this week, one of the oldest events of its kind in Europe.

Model United Nations (MUN) brings together students from around the world to simulate real UN committees and discussions.

This year, girls in Year 10 girls have had the opportunity to become part of the Model United Nations Club at HAB (pictured), where they practise UN procedures and have also attended several online conferences throughout the year, inlcuding the most recent one in the Netherlands. 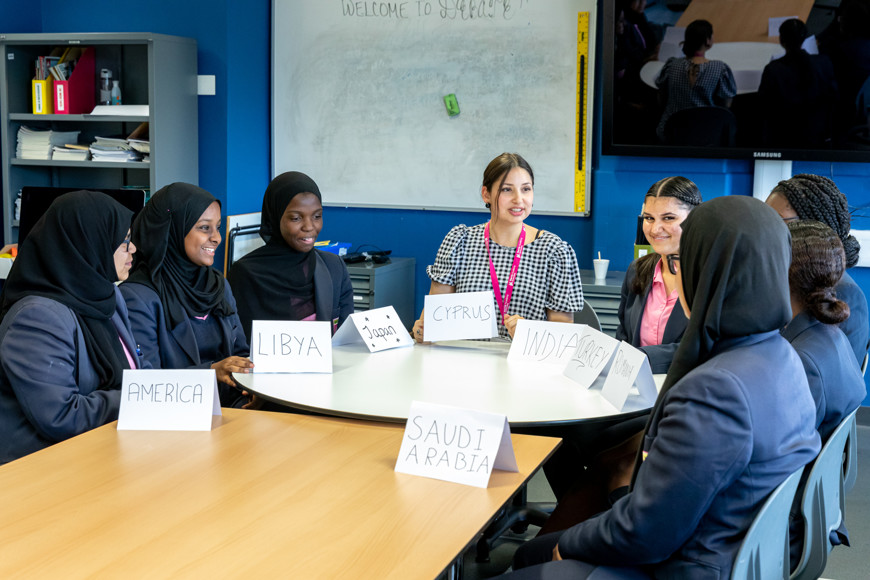 They had to research and prepare to present their countries in advance whilst delivering opening speeches. They actively took part in discussions and debated issues such as of Covid 19, domestic violence, gender equality, health discrimination,  international laws and sustainable agriculture.

Students were also impressed by the speakers of the conference such as Dr Florian Bieber, a renowned political scientist, and historian working in the areas of international relations, inter-ethnic relations, ethnic conflict, and nationalism, focusing primarily on the Balkans.

Also Dr Peter Jay Hotez, a scientist, and pediatrician focusing on the topics of global health, vaccine development and the control of tropical and neglected diseases. 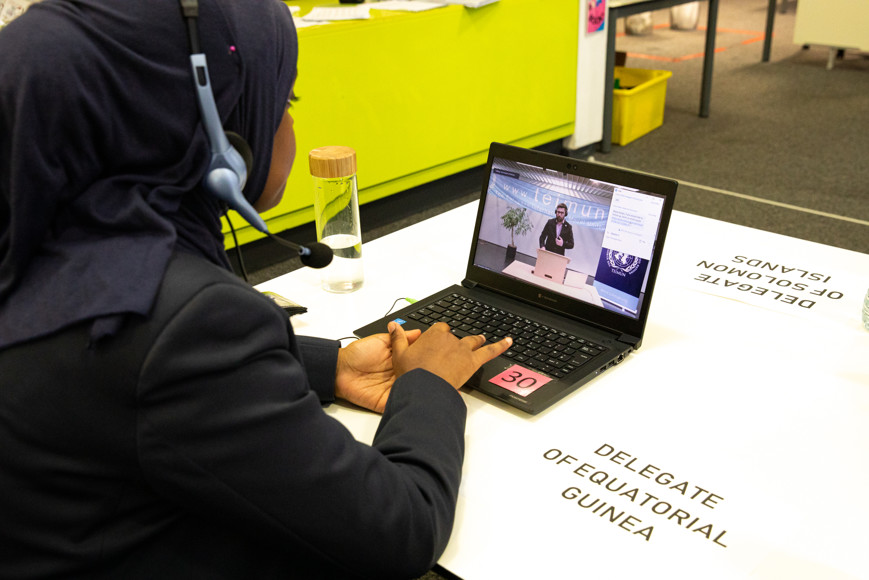 Taqwa's feedback on her involvement in the conference.

"I joined the United Nations Framework Convention on Climate Change (UNFCCC) council and was assigned the Delegate of Chile. During the conference, we were working on resolutions for sustainable corporate development in the aftermath of the COVID-19 crisis. Delegates discussed ways sectoral restructuring could be a necessary component of any meaningful climate change response to fight economic and environmental challenges.

The UNFCCC were visited by a veteran who fought in Bosnia. He shared his experience as a soldier and taught us that we, as humans, don’t only live for ourselves but for others too. As the day went on, delegates worked together to create and improve solutions towards a greener planet through sustainable agriculture.

Our unedited resolution paper resulted in 14 pages which exceeded the maximum amount of five pages. It was amusing to collaborate with other delegates and shorten our resolution paper under a time limit. Overall, the conference was an inspiring experience as I gained many skills, such as public speaking, diplomacy, debating, and teamwork. I’m grateful I had the opportunity to attend, and I can’t wait for my next Model United Nations conference.” 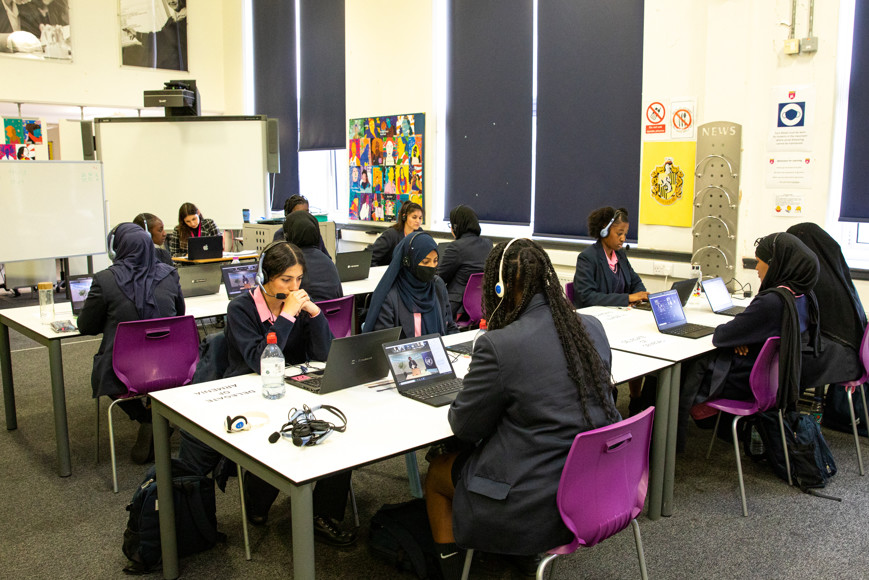 Tasfia reports on her role at the conference.

"I was part of the United Nations Framework Convention of Climate Change (UNFCCC) committee following the Paris agreement of 2015; it aims to lower the global temperature ideally below 1.5 °C above preindustrial levels.

Representing Egypt – a country known for its ancient history, arid climate and the River Nile – andspeaking upon the topics of sustainable corporate development post-Covid-19 and the development of sustainable agriculture was eye-opening. As we place a lens on filling our stomachs and satisfying the economy, the people of Egypt are living with polluted food and water, and a crippling economy in turn of being on the frontline of climate change.

Health is key in being the "national condolence" bringing the consideration of digitalisation, resilience, sustainability, for example, the recent implementation of digital certificates verifying those who are vaccinated to freely travel which in turn continues to encourage building forward with a "society and economy" that "caters the damages of the Covid Crisis." 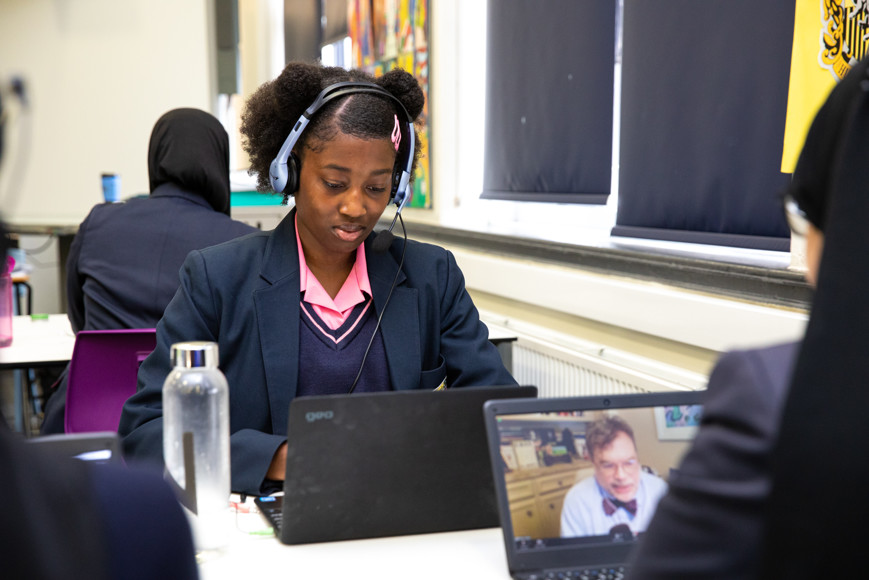 "This conference was definitely a gratifying one and I learned new things about different international issues, the Covid 19 effect on gender inequality and health discrimination against women, the differences among countries based on their economic status, traditions and geographical location."

Humaira's overview of this year's conferences

Humaira explains what Model United Nations (MUN) is all about.

"Model United Nations is seen as something tedious, but it can be entertaining. I’ve taken part in three MUNs this year, and each of them were different and had their own perks.

The conferences start with an opening ceremony, then you debate about a few topics for three or so days, and afterwards it ends with a closing ceremony. However, in between the debates, there are fun games you can take part in, to get to know the other delegates.

During NTUMUN – a conference held in Singapore – they gave us the chance to play a murder mystery; a chair governing the conference had been kidnapped and we had to use clues to find his location before the kidnappers had hurt him even more. It was fun, since I was able to play with my friends, and I made some new ones along the way.

MUN is a great way to improve your debating skills and teamwork. I’d definitely advise you all to give MUN a try!" 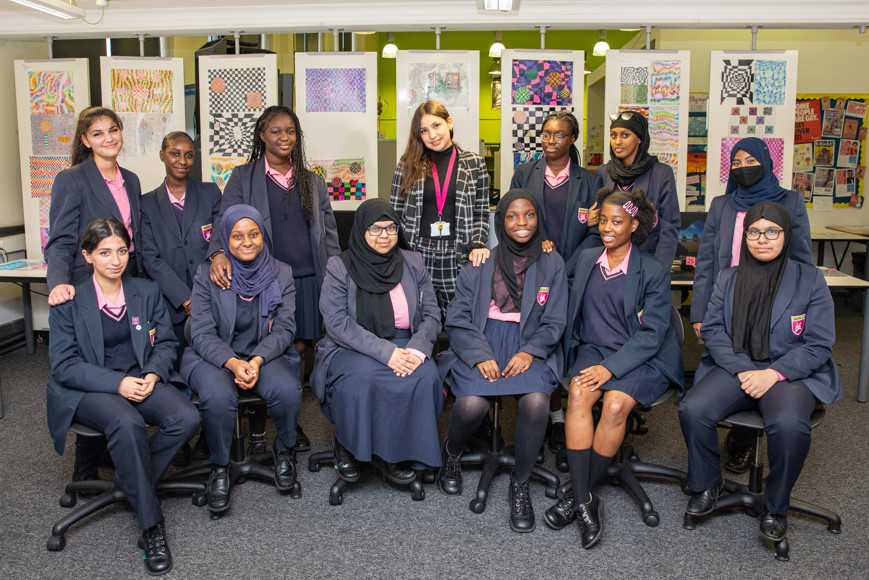