You, your children and the school could win HUNDREDS of pounds worth of books with this fantastic DESIGN A BOOK TOKEN competition for #WorldBookDay2021 https://t.co/TZ6Yr0YkmJ

It’s National Offer Day today for Year 6 families. Good luck to families and welcome to all new HAB girls who will have received a confirmation of their place at Harris Academy Bermondsey today. We're really looking forward to meeting you! https://t.co/hdCCL7tV3U

Check out the live events that HAB students can sit down and enjoy with their younger siblings. #WorldBookDay https://t.co/AUeciYDGlP https://t.co/10YDLH6aF8

Have a look at the brilliant FREE audiobooks available on the #WorldBookDay website https://t.co/WffFvXitQI https://t.co/6Mr3emR4tR

Competition time! TAKE PART in ‘Show Your Shares’ on social media. Celebrate the joy of reading together with images of everyone sharing reading and stories. #WorldBookDay, 4th March 2021. Find out more https://t.co/BYdPnzMrt1 https://t.co/04HXDFBOD0

Maria arrived from Poland in Year 7 knowing little English. Five years later she achieved Grade 8 in both her English Language and Literature exams. Read about Maria's language journey, and how we support students though our #EAL provision. https://t.co/2FLMMeK2ee https://t.co/IZJ3jtA99E

Bintu, Year 13, has received offers to study #Law at @SOAS, @warwickuni and @BristolUni. "I found the feedback from @HFexperience really helpful for my personal statement and am part of @SocialMobilityF which really helped me too." #ProudToBeHAB! More at https://t.co/oRObPcWkzD https://t.co/2de5VJuwBu

HAB Angels, our #cheerleading team, is working on a series of challenges such as chanting, dancing, flexibility, balance and strength. Last week they filmed the HAB Angels chant - here is a sneak peek edited by Mr Creasy and Ms Palmer. https://t.co/j761QcnG55

Protect your child when they are online. FREE online webinar for parents, Thurs 28 Jan, 6pm, run by Digital Awareness UK. One-hour web session just for HAB parents and carer. Find out more and sign up at https://t.co/Cka7mzdbwA

Literacy for Learning conference, Thurs 21st - Fri 29th Jan. Loads of great sessions! @HarrisFed has secured free admission to this @Literacy_Trust event for all Harris staff, parents and students. See the programme and sign up at https://t.co/ddHxnTe77v

Six of our girls will be attending a three-day online Model United Nations conference hosted in Prague this Friday-Sunday, to discuss topics relating to women, human rights and security. Find out more at https://t.co/ZI3P4Tm2vh https://t.co/by82BKd4Ea

Are you a parent/carer of a girl at HAB? Come along to our Friends of HAB online meet-up for parents, this Thurs 21 Jan, 5.30pm. All HAB parents very welcome! We'd love to see you there. Find out more and register at https://t.co/xVnUh0AI8F

Each of the girls chose an issue they care strongly about. They then researched and wrote articles about that issue and also created a campaign poster to raise understanding and awareness.

Michelle chose the unfair treatment of asylum seekers as her issue. Madyson and Maria looked at discrimination against women, while Mayeda looked at the modern day genocide of Uighur Muslims. 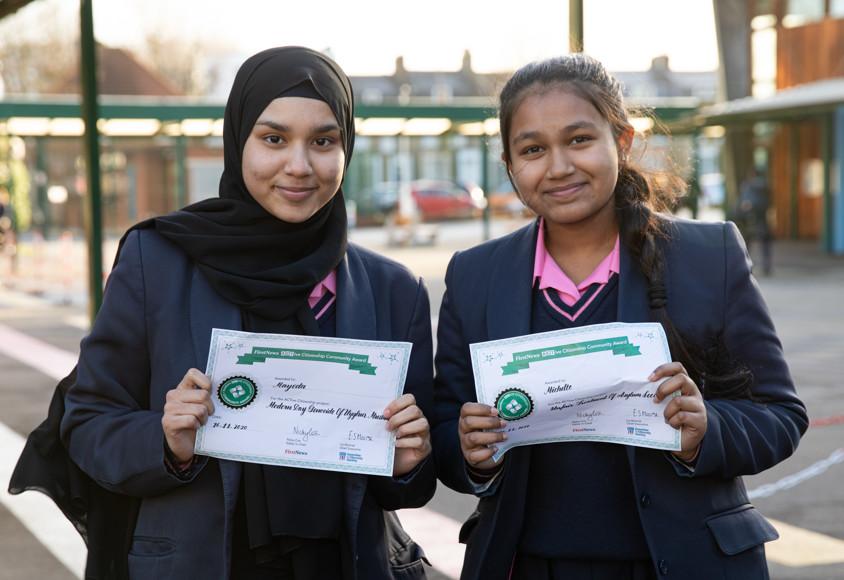 “This award means a lot to me because I wanted to raise awareness and show my passion about the topic,” said Mayeda (above left). “I wanted to show that even one person can make a difference and change the wrong that others try to hide. I hope to inspire others to speak out and make the world a better place.”

Michelle (above right) says the project helped her develop a stronger voice. “It shows my voice as a citizen, having the ability to influence others towards the process of change,” she said. 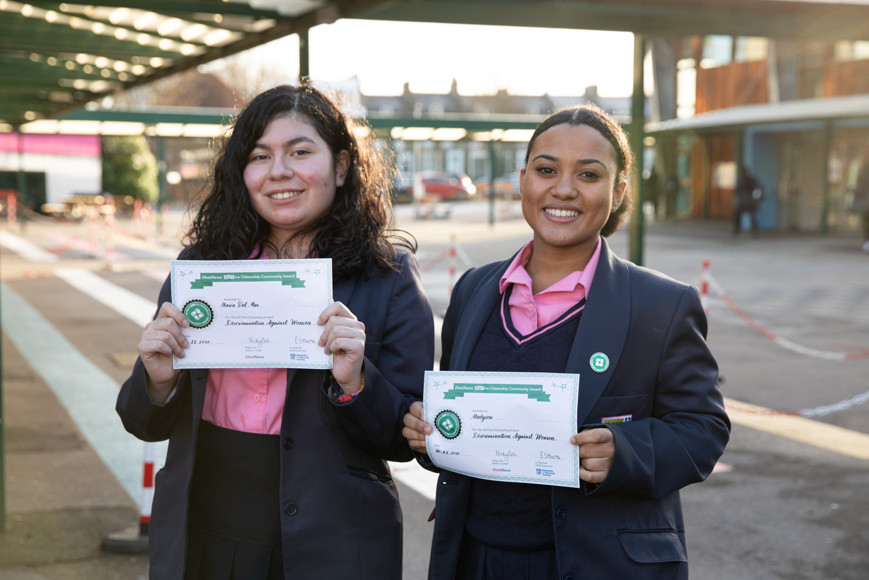 Madyson (above right) said: "I feel so good about being able to make a change in the community and being able to share it with the rest of the nation – I hope that my project is enough to raise more awareness and contribute towards a better future”

Maria (above left) said: "Having won the first news active citizenship award makes me feel proud because I was able to carry out a project which was to do with discrimination towards women and how it is normalised in society. Through this project I was able to raise awareness about the discrimination that women face in the daily."

The award is run by First News, the national newspaper for young people, to acknowledge positive social changes children are making through active citizenship.

“Their projects demonstrated how individuals can become Active Citizens in our democratic society, and that hard work, commitment and determination can bring success,” said Mrs Amechi.