Join us on Zoom for our final live online open event, on Sat 17th Oct, 10am, and see for yourself how we could make a difference to your daughter's future. We look forward to welcoming you. Register at https://t.co/xtRe06t565

Our final two Zoom online open events for Year 6 children and their parents are on Weds 14 Oct, 5.30pm, and Sat 17th Oct, 10am. See for yourself how we could make a difference to your daughter's future. We look forward to meeting you! Register at https://t.co/xRTkXziEJN https://t.co/LzdAvrmzOv

We are so sorry but we are having technical difficulties and appear to have lost our Webinar section on Zoom, which means the meeting planned for Sat 10 Oct, 10am cannot take place. Very sorry. We will host another Webinar next Saturday (17th) at 10am so you don’t miss out.

Do you have a daughter in Year 6? Join us on Zoom for live events to find out more about our academy. Sat 10th Oct, 10am & Weds 14th Oct, 5pm. Meet HAB staff, Q&A. Hosted by Lyndsay Harris (Vice Principal). Find out more at https://t.co/xRTkXziEJN https://t.co/rldDoJBcHT 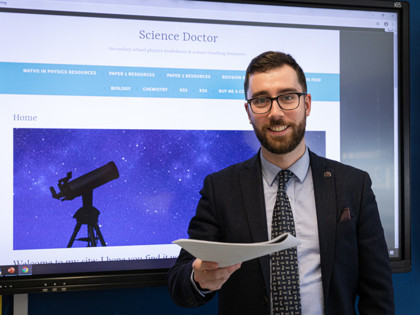 When HAB science teacher Peter Edmunds started to make his worksheets available online for other teachers to download, he had no idea how popular they would become.

Mr Edmund’s website ScienceDoctor.School.blog used to have over 10,000 hits a month and his teaching resources have been downloaded over 60,000 times. But since the lockdown, downloads of teaching resources from his website have roughly doubled, he says.

“If you assume each one of these resources has been used with a class of 30 students, I find it quite humbling to think there’s potentially a million of my worksheets floating around the world!” says Peter. “That’s a pretty crazy thing to think about.”

Peter’s website has resources on forces, acceleration, Newton’s second law and infrared radiation, for example, plus revision booklets and worksheets for Key Stage 3 Biology and Chemistry and Key Stage 5 Physics too.

“I share as much as I do because I know teachers spend a large amount of time creating resources. By putting my resources online, I hope it can save people from having to do the same work again, though it’s taken me by surprise that it’s taken off in such a big way.”

Peter is proud of the quality of the resources he creates and particularly of his ‘ramped resources’. “They start with basic questions which are the most accessible and then go into medium and hard questions, which are the more conceptually difficult. Because the resources are ramped in difficultly, regardless of where the student is in their own confidence and ability, if they start at the beginning they can progress through the work and feel more confident as they go into the more difficult questions.”

Peter promotes his resources on Twitter (“there’s a lot of teachers on Twitter”) but is noticing that more people are now finding their way to his website via search engines. “Teachers must be searching for teaching resources online and then come across my website, which is great,” he says.

"You can’t learn Physics without practice"

Thanks to Peter’s worksheets, children around the world are getting the chance to practise Physics the Science Doctor way. “I’ll acknowledge I probably spend a bit too much time putting the resources online and keeping the website up to date!” admits Peter. “But in the future I know it’s going to be a fantastic timesaver for myself and other teachers so I don’t mind investing the time.”