A group of 11 students from Years 9 and 10 took a trip to Beaconsfield Gallery, an artist-run gallery in Vauxhall, to learn about immersive art.

They worked with Dubmorphology, an experimental audio-visual collective, to create work which will be added to the Spirit_off: Dreaming Utopia installation, which is currently on display at the gallery. 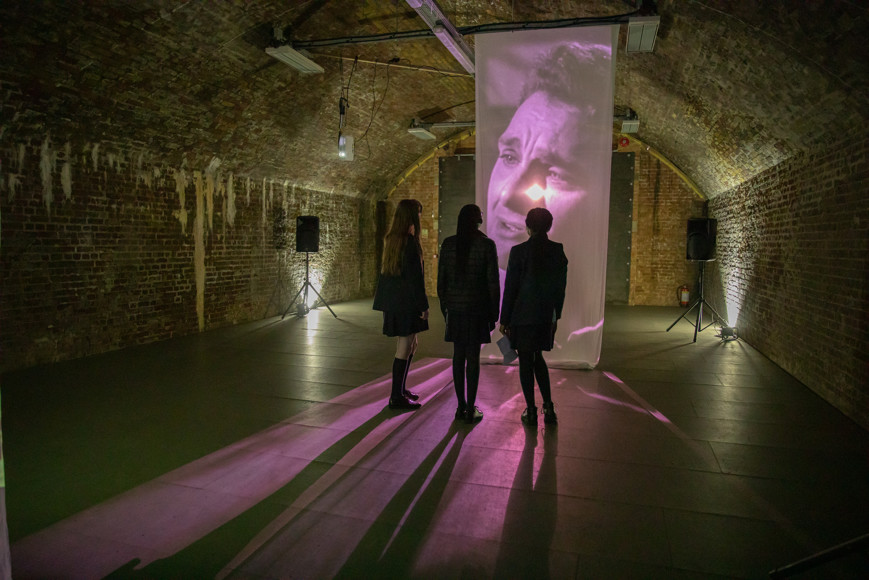 Students were wowed by Dubmorphology’s interactive installation and loved the fact they could manipulate the moving images on show. Students recorded some of their spoken word pieces and Trevor, from Dubmorphology, showed the students how to manipulate their recording using computer software. The girls audio records and visual work will be incorporated into the Spirit_Off exhibition. 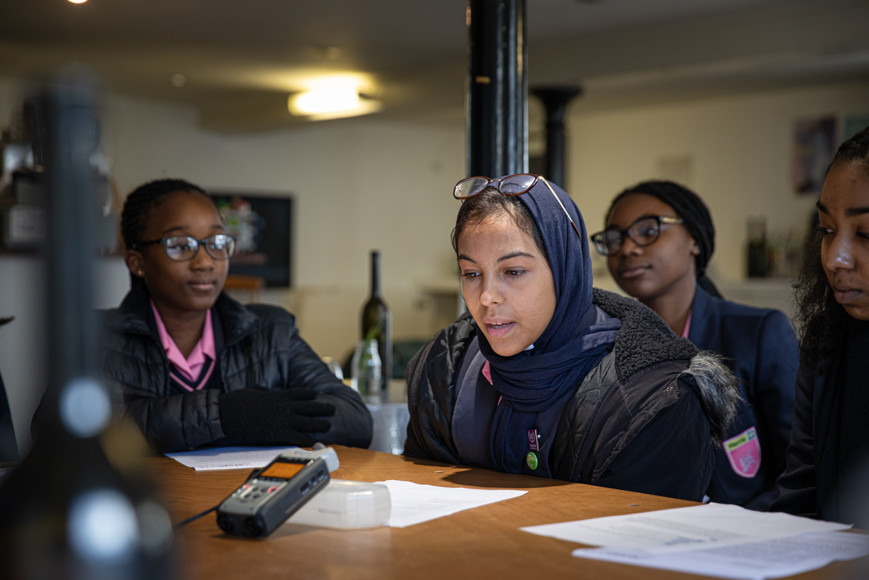 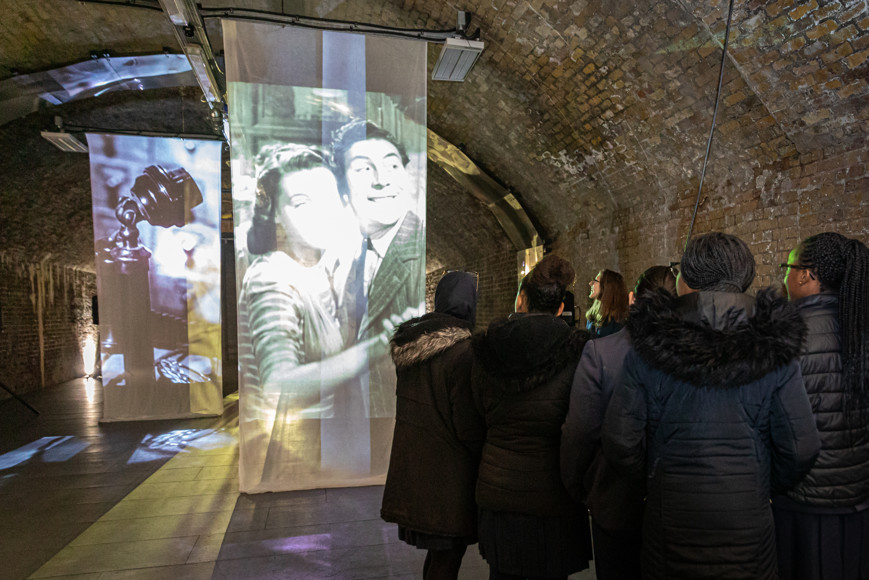 What our students said…

“Today, I have learnt about utopia and Afrofuturism. I loved how everyone has had a chance to express their opinions about utopia and what it means to them. There was also a cat that I really wanted to take home but Ms Morris wouldn’t let me.” Victoria

“Today we saw how Dubmorphology used the Ealing Comedy film Passport to Pimlico to create an immersive and interactive piece of art. The film was shown in the gallery’s arch way and was shown over many screens and it was accompanied by an eerie soundscape – it was very atmospheric.” Ahlia 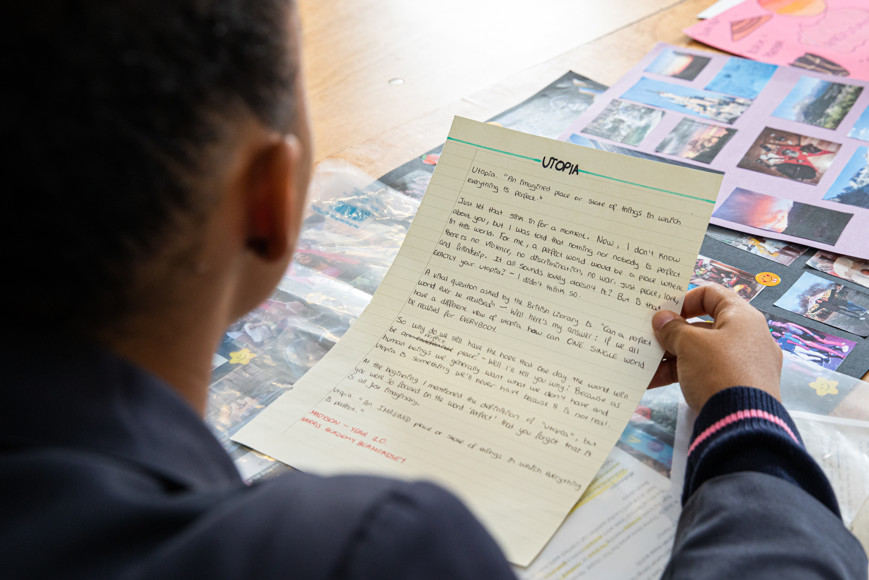 “I really enjoyed the arch room. The projected screens filled the room and created a beautiful yet haunting atmosphere that left my mouth running with praise and asking to capture the moment over and over again.” Megan

“I really enjoyed my experience because I had my own understanding of utopia and Afrofuturism so it was really interesting to see the different views for the other people in our group. I really loved experimenting with the keyboard in the arch room because it controlled the art work on display.” Mayson

“I found manufacturing a background theme to our poetry fascinating. The arch exhibition was very interesting. The workshop has inspired me to create my own visual art masterpieces.” Ava

“I learned how to layer my spoken word recording over a self-produced beat. I was easier than I thought. I had fun doing it.” Maliyah

“Utopia is unachievable. It plays on an idea of perfection which is subjective. For this reason, a general ’utopia’ will be dystopic for some. At the workshop I heard some of the written work from my peers and concluded that utopia cannot be material.” Kandi

“I have learnt how to make spoken word more engaging with the use of sound and images. Merging spoken word with visual and sounds makes it an art form.” Nuha

“The workshop has inspired me to combine poetry and visual arts. I am planning on creating a montage of images from the areas of London that has a lot of skyscrapers and overlay the images to a track of my spoken word creating one memory in a memory bank.” Amina

“We went to ‘the Arch’ which was a place where Passport to Pimlico was projected on to a screen. Whilst the visuals of the films played, you could hear someone speaking about utopia. It was very exciting.’ Christine

Before the trip, students explored ideas about Utopia and Afrofuturism and prepared some stunning spoken word pieces and images.

Exhausted. Hungry. In pain. I trekked through the intimidating jungle, lost in thought, when something caught my eye. Its enticing aura beckoned me, curiosity consumed me. I reached my hand out and picked it up.

An amethyst crystal sat in my hand, beaming at me. My eyes entranced my feet dragged across the jungle. My feet halted. I came to a stop and my eyes broke out of their trance to see a huge gate stood before me. The amethyst flew out of my hand and landed onto a gate, radiating a lilac glow. Cautiously , I stepped into the gate. I gawked in awe at the marvellous and futuristic city, which was buzzing with life. Tall elaborate skyscrapers hovered over the area, like guards of their city. The purple tinted glass structures glistened as the sun smiled with joy.

Near the town centre was teeming with life; I was passed by people with rich and glowing melanin which was covered in jewel embezzled clothes to represent their culture. The market had many stools, illuminated by the same stone which was in my hand, to keep the food that was being sold fresh.

The town square was absolutely breathtaking. A gemstone  monument stood tall and proud in the centre, surrounded by crystal clear pond. A powerful aura radiated off of the statue and spread into the world before it. The guards in front of it stood still and silent. Decorated in an ornate violet armour, they carefully observed the harmonious chatter and laughter on the streets.

This is where I belong. This is my utopia. 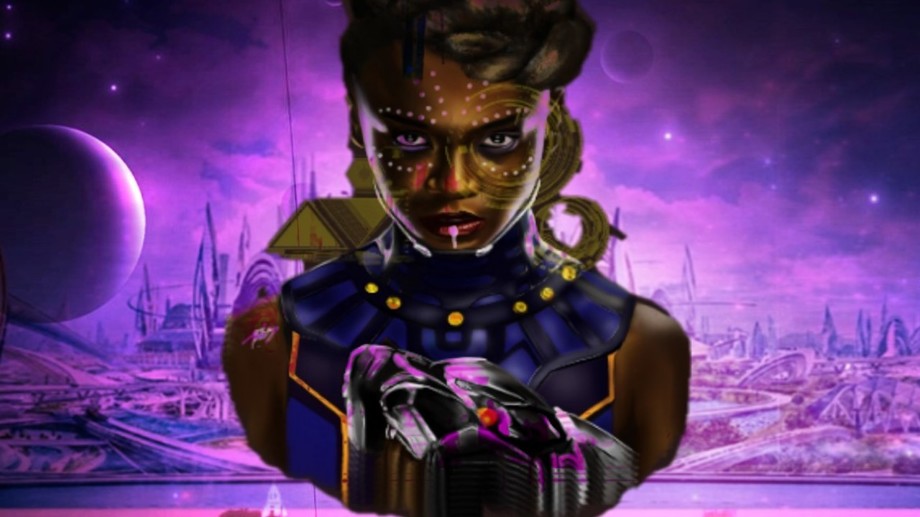 I rest my head and every night

A million scenes flash before my eyes

I don’t know where they come from

But they ignite a passion in me

One that is incomparable

Cannot be described or labeled

I see visions of heaven

Projections of a future

I see a dream that never ends

There is forever in my mind

A forever that will be mine

On the brink of what's new

Where we reside beyond all we’ve ever known

Finally reaping the good we have sewn

Our ancestors have blessed us

With a land so lustrous

Dive deep and reach out

Give your soul what it has been for so long without

I fall back into a world unlike no other

The deep blue velvet of the earth

Provides you energy for rebirth

Prisons of my mind

Abhorrence from those outside

Will never Separate me from a world of perfection

I must forever reach beyond this reality

For ambition beyond degree

My black pearl will shine for infinity

To me perfection is the crisp smell of rain in the morning.

It’s the pink tinged swirls of cotton slithering across the heavens.

Tear stained cheeks being wiped by a soothing hand.

Then enveloping sensation of an embrace from a loved one.

To them utopia is the startling brilliance of steel structures.

The blinding reflection of dawn on the glass hundreds of metres in the air.

The intricacies of metal and the artificial orange hue of street lamps.

But their utopia is my dystopia.

Where they see marvels of engineering,

I see ersatz mountains and hills.

Where their eyes perceive the amelioration of cities.

I see giant lumbering scaffoldings of tin and steel.

The whole concept of Utopia is trapped in a never ending cycle. The ultimate paradoxical truth.

The line between Dystopia and Utopia is a fine one.

My Utopia is their dystopia.

and their utopia is my dystopia

and my dystopia is their utopia.

and my utopia is their dystopia. 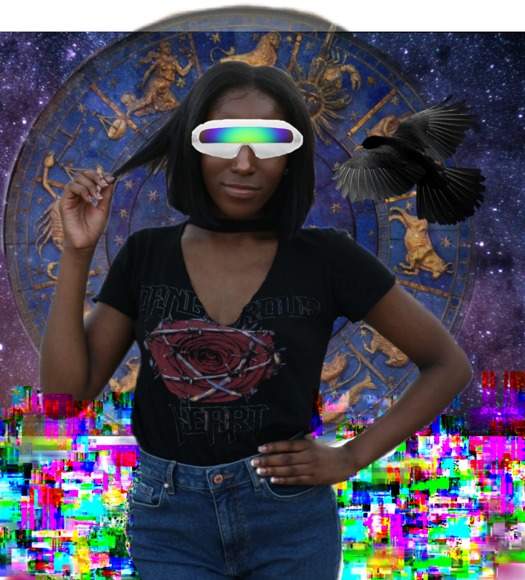 This is just utopia

However, it only resonated in a huge pile of love and empathy

I vaguely remember the clear sky

With its subtle winds of July

I remember how perfect everything was

How safe and calm my mind found itself

But then it hit me

It was just a Utopia

Where I could smell the sweet subtle scent of blossoms

Where everything was decided by a unanimous vote

Where everyone lived in equality and peace

I love being there, I loved everything about it for

It was just a utopia

I could see a world that resembled heaven

A world that could only cause me depression

For a place this perfect could never truly be real

For a place like this was only a perfect illusion

It was just a UTOPIA

What has happened to this lost day?

But take heart, there is little hope!

Close your eyes and see your home.

The untold tale of their roots,

The roots that grew abundantly.

Close your eyes and see your home,

Their future exploding with colour,

The people smiling and experimenting,

Find their broken past, forgotten identity

Create and celebrate the history of these people

And keep and live in this world in your hearts.

UTOPIA. Idealistic future, in which, exists only perfection. This term derives from Thomas More, when, in 1516, he was inspired by the Greek word; ou-tops, which means, `no place. ` To me, Utopia is somewhere that fairness is the main priority.

My ideal homeland would be somewhere fairness is a constant and never-ending.

MUSIQUE CONCRETE. Music created through a mixture of recorded sounds

She gently brushes a platinum coil from her forehead, adjusting it, so that it may cascade with the others; an unapologetically picturesque bouquet of silver and bronze spirals shone in the brazen sunlight, and bounced on her godly head, as the caressing wind  tugged at the curves of the landscape, enriched with golden tigers and steel trees- manufactured exclusively, with solely, the best technological advancements. With eccentric power, she strode through a spherical room, illuminated with the violent blue hue of its endoskeleton, made up of electrical veins and ardent programming. Elegantly, she descended onto her majestic throne, composed of electricised diamonds and glorious heirlooms. This was her kingdom. Her utopia.