A massive THANK YOU to all our students, parents and staff for your support over the past few difficult months. We hope you all have a great summer and really look foward to seeing you all again in Sept! 🙂 #ProudToBeHAB

Watch the HAB Band perform 'Valerie' for our Class of 2020 Year 11 Leavers! https://t.co/GGcfLcJLiO

"Be Brave, Be Bold, Be Curious." Here's a special video message to our Class of 2020 Year 11 leavers from your teachers! https://t.co/1ahbQM1mbE

Tara in Year 7 has made these lovely dolls in our academy colours to be our lockdown mascots. We’re naming them Dollinkas, or little dolls. Thanks Tara! We think they are really sweet :-) #ProudToBeHAB https://t.co/WHGuKlJEGu

A video message to our wonderful Year 13s as they embark on the next stage of their journey... we will miss you loads. #ProudToBeHAB of you, always. https://t.co/8ZnLZ3nQbK

The charity @TechmumsHQ has created a great series of FREE online mini-modules to help mums develop their tech skills over the summer. You'll find modules on getting started with the internet, email, safety online, social media, and more. Have a look! https://t.co/WK84cnnL2I

The National Literacy Trust has just announced their amazing Words for Work internship programme with Lancome, Great Portland Estates and Pwc! This experience will make your CVs and UCAS applications stand out from the crowd. Apply today! https://t.co/DdaR70wEKH https://t.co/JgjfI4XQUA

Hello Year 6! If you are starting Year 7 at Harris Academy Bermondsey in September you can now watch a five-minute video tour of the school here. Let Dr Hay be your guide! https://t.co/1pPa7CoBsk 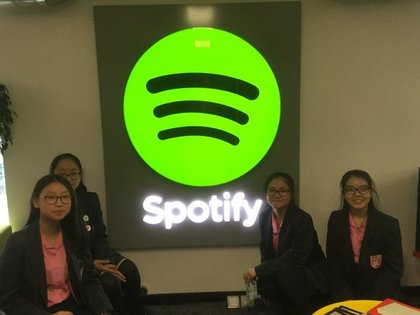 Girls from HAB made it through to the finals of a competition called Apps for Good recently, after developing an App called Hi School to improve school work with help from friends and experts.

The day of the finals started at Spotify’s offices (pictured) where we had a tour, and then the team were given the opportunity to pitch their idea to staff.

Spotify staff were great as they listened to the pitch and then help the team to fine tune and improve the app idea ready for later in the day.

After Spotify we headed over to Rich Mix London where the students pitched their idea to a group of judges (pictured below), alongside two other teams. The judges had the opportunity to ask questions and then went away to deliberate. Our final task for the day was to present in a marketplace – this involved discussing their app idea to over 200 industry professionals (see below) and trying to win their vote in the People’s Choice Award. 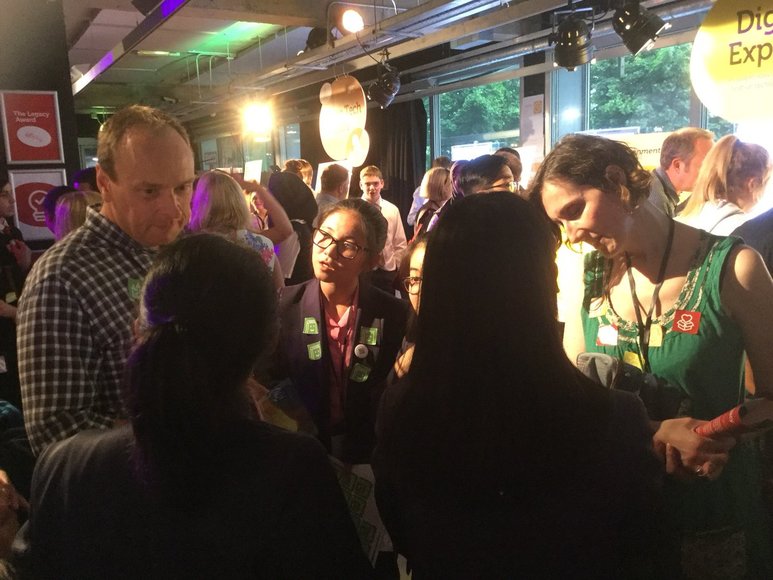 The awards were then presented. We did not win in our category (Rising Stars) but I am incredibly #ProudToBeHAB of our students for the hard work they put in. It’s not easy to present to strangers and they did so with eloquence. They also engaged with so many of the industry professionals. It was a phenomenal day and we hope to try again next year.

What our students said

Around a month ago, I and my friends created an app and luckily we got through to the final. We had to create some things to prepare for the trip. There was a video to convince people to vote for us and a presentation for the judges, who are called ‘The Dragon’. On the trip, we first went to the Spotify office in London. We travelled by bus. We got there quite early so we could take some pictures which Miss Newell has put on Twitter and to also have a conversation with the Green Team from St Marylebone Street School. Also James, one of the staff in Spotify, said that we can have anything we want but the laptop so we had some drinks and biscuits. At 10:30 the staff introduced themselves and we went around the office. After that we started to improve our presentation with some advice from Joe and his co-workers. We showed them our presentation and went through each slide with them. After we had lunch and got a present from Spotify. Then we went to Rich Mix which is where the award ceremony took place. We attended and the staff gave us a card and we went to the fourth floor to prepare for our presentation. Luckily we got to present our idea first and after going through the presentation ‘The Dragon’ asked us some questions. Actually we got asked the most questions. Then the Imagetale and GreenTeam presented. After we went to the ground floor for the market. At the beginning, not many people attended so we went around and swapped stickers with other teams. Also we got some badges and sweets. Miss Newell had an interview with a journalist and she is going to show us when it comes up online. Also at the market we had a board about our app to help us present to people our app. We also had a prototype which helped us. During the market we had to talk a lot and we had the opportunity to meet some special people and help improve our skills. Also we spoke so much that Dan got a sore throat. After the market, the awards started so we found out who the winner was and we did not win. However I’m still proud of myself.

We went to one of London’s Spotify offices near Hamleys. We went with the number 1 bus and then we got on the 453; throughout the journey we practiced our presentation. The trip in total was about an hour long (unluckily, we had to wait 8 mins for the Bus 1 but didn’t have to wait for the 453). Then we had to walk for a little bit to Spotify. We got into the lift and went to the 4th floor, signed in on an iPad, got the internet password, invited to a lounge-like area, allowed to take anything edible. The Green Team had arrived and said hello. ‘James’ came back (he originally showed us into the lounge-like area) and gave a speech, introduced two senior Spotify employees: Emily and someone gave a speech on how to present (e.g. speak slowly and clearly, or to use more images that text in the powerpoint). Quick tour around the office then went into the 'Electric Ballroom' which was a meeting room with 3 Spotify employees. These employees helped us by listening to and providing a better alternative to our pitch (e.g. slowing down). We did that for over an hour until lunch. After lunch we received some gifts from Spotify. They kindly called a taxi for us where we practiced our pitch with the changes throughout the ride. It took 30 minutes to get to Rich Mix, which is where the Apps for Good activities were taking place. We received a quick introduction, calling 14 groups together, and were then sent to other rooms where the pitching to the dragons would happen. We sat on a big, round table and practiced our pitch. Half an hour later, the dragons were introduced. We were the first group up, I missed a part and remembered straight after, a bit too late, but luckily everyone else didn't. The rest of the presentation went well, in my opinion, though there were times I spoke too fast – nobody noticed the speed I spoke at though. Then came questions, asked by the dragons. One came late, just missing our presentation, so what they thought only rested on the dragon's questions and our answers. A few long pauses while we were answering – I think it was because we tried to give everyone in our group the opportunity to answer. Nearly all questions were difficult. The dragons were super critical but we did want truthful opinions so I guess we got one thing we wanted. We answered all questions though sometimes I didn't understand a question but all was good. All the dragons were super helpful. One of the dragons would help explain questions if we looked confused. They asked thought provoking questions, such as our main aim. Then after approximately half an hour, the second team presented. Their app, Imagitale, was a lot simpler and had a specific target audience. They had concise ideas. In our section of three teams, after Imagitale's presentation was the final team's: The Green Team. There were two girls who designed an app for calculating your own carbon footprint, with rewards as motivation. After we had dinner, then we went downstairs for the marketplace. An hour and a half of talking to a lot of people about our app. Finally was the awards presentation. For the judge's decision in our section, Green Team won. Their ideas were more detailed, having even spoken to important political people about their idea. For the people's choice award, a language app designed by primary school children won. Then, home!

Around a month ago, our team – Glasses: Xue-Jun, Thein, Linh and I attended the Apps for Good Award Ceremony. After, during the break-time Ms Newel found us to inform us that our app was in the final list. However, at that time we didn’t know anything about this trip so we were worried about it. Luckily, about one or two weeks later we had information about the trip. So on the 20th June, our team and Newel had the chance to go to Spotify’s office. We took a bus and during the journey we practiced our presentation. When we arrived, we were surprised about their office. It didn’t look like how we imagined; it was so cool! They had a ping-pong table, kitchen, mini stage, a lot of snacks and the fridge was filled with drinks. Surprisingly, we were allowed to have the snacks and drinks for free. Next, we met a group of people who worked who helped us with our presentation. At the beginning, we were worried but they were friendly and nice so we felt more comfortable. They gave us a lot of good advice about the presentation, the app and how to improve it. Then we had lunch at their office and then we made our way to Shoreditch, where the actual presentation took place. We had about 20 minutes to prepare and the judges – ‘The Dragons’ - arrived. We presented first so we were a little bit scared but it was still good. ‘The Dragons’ asked us many questions about an app and some of them were difficult but we were still able to solve them. After the other teams finished their presentation, they came into our room for dinner, this lasted 1 hour. After, we moved to where the networking event was organised. The Apps for Good team made lots of stickers that had our logos on it and a big board with our app on it. When the networking started, visitors went to each teacher and questioned what our app was about, how it worked and why we had this idea.

Although I was very tired after the trip, it was very great. We didn’t win the award but we had an incredible opportunity to work with the Apps for Good team, Spotify, Lego and also Dragon. It was a good chance for me to improve my English skills. Additionally, Spotify gave us a lot of cool souvenirs such as T-shirts, flip-flops, head-phones and speakers; this was the best trip ever!